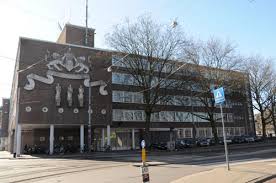 “We have a choice: do we want to be a repressive or supportive service? We recognize all people are equal before the law & must be treated as such & those most affected must lead solutions.” – Asst Commissioner of Amsterdam @Politie addressing police from around world #AIDS2018

On the last day of the 2018 International AIDS Conference held in Amsterdam, I was lucky to join 25 police and civil society leaders from several countries across Sub-Saharan Africa and Southeast Asia on a visit and meeting with the Amsterdam police branch of the Dutch National Police. The meeting was held at the Amsterdam police headquarters. The focus was on what it means to embrace a public health approach to policing. Is this possible? What does it mean for police and society?

The meeting was organized by the International HIV/AIDS Alliance and the Law Enforcement and HIV Network (LEAHN). The Alliance published an article on the meeting in which I was quoted, and it’s available here and re-posted below.

“A public health approach to policing.”

It was Commissioner Pim Jansonious who set the tone when he stressed the importance of developing a “socially-minded” and “representative” police force that works in partnership with other agencies to protect all people – no matter which community they belong to.

He was speaking to an audience of more than 25 law enforcement officials, decision makers and civil society activists from Indonesia, Kenya, Mozambique, Myanmar, Nigeria, Uganda, Vietnam and Zimbabwe, exploring how the Dutch police work with marginalised communities, including people who use drugs and lesbian, gay, bisexual and transgender (LGBT) people. The event was hosted by the Alliance within the Partnership to Inspire, Transform and connect the HIV response (PITCH) programme on the fringes of the International AIDS Conference in Amsterdam in July.

Arrested for possession of a large amount of marijuana, which he was safeguarding for a friend, Yogi, 39, got a 14-year prison sentence in Bandung prison, Indonesia. Diagnosed with HIV, he now teaches other inmates how to stay healthy in prison. © Vincent Rumahloine/Alliance

Despite the push to decriminalise drug use and homosexuality in some countries, police forces elsewhere are facing increasing pressures to abandon a public health-based approach when dealing with marginalised groups. At the same time, funding cuts, new crime classifications and an increasing demand for services are driving the police to take a more punitive approach. Yet, this approach can be hugely detrimental, particularly when it impedes work to prevent new HIV infections.

The Dutch police have decided to take a more positive approach. At the event, officers from the Amsterdam Police Department and the Belgian police took the opportunity to discuss with their counterparts from PITCH countries their more nuanced approach to policing, sharing specific examples and pilot studies with participants.

This included their “Top 600” initiative, a programme designed to track and monitor the people who have the most contact with the police and public health services. Working in partnership with more than 40 different agencies and organisations, the Amsterdam police force has devised a series of tailor-made interventions designed to help tackle the underlying challenges faced by the ‘top 600’. This person-centred approach means that, instead of immediately being arrested and detained, people are now referred to community-based mental health, treatment, or housing services.

Diversion programmes, which channel people away from prison and towards other services, are also being piloted by police in central Amsterdam, an area with high levels of illegal drug use, homelessness and public disorder. Through the pilot, when a petty crime is committed, a psychiatrist is called to conduct a rapid assessment. The report is then submitted to a public prosecutor who uses the findings to make a sentencing decision. During the pilot study almost 28% of those arrested were using drugs, while 24% had an existing mental health condition. Following the assessment, these people were then connected to the appropriate health services and their sentences reduced or postponed, depending of the severity of their crime.

Participants were keen to understand if and how these approaches could be adapted in their own countries. Some of the challenges they raised included implementing diversion programmes in a setting with no mental health or community-based treatment services to refer people to (Myanmar); health services and prison services working in siloes, and health services not being free at the point of contact (Nigeria); lack of investment in harm reduction and mental health services (Uganda); and stigmatising attitudes by healthcare workers, making them more likely to call the police instead of dealing with a patient’s drug problem (Zimbabwe).

Implementing a more progressive approach can take time. Assistant Commissioner Peter Muyshondt from Belgium – who is a strong advocate against the war on drugs – was refreshingly honest about the challenges facing police forces, including their over-reliance on stereotypes and profiling. Performance metrics that are explicitly linked to number of arrests are also problematic and further restrict a police officer’s ability to take a more public-health based approach. The code of silence within police forces also prevents officers from speaking out and challenging the status quo.

This is true even in Amsterdam, a city that has long had a reputation of being LGBT-friendly, liberal and culturally diverse. One of the ways the Dutch police have attempted to change their operating culture and make themselves more accepting of marginalised groups, is to create a new task force called “Pink in Blue”. This is a specialist unit – most of whom are LGBT themselves – dedicated to building solidarity with and protecting the gay and transgender community.

In Amsterdam the police recognise that it is their duty is to protect and to promote public safety and wellbeing. Rather than ruling with an iron fist and stamping out ‘undesirable’ behaviour, the police are actively working to protect those who cannot protect themselves. This struck a chord with a Zimbabwean parliamentarian, who reflected: “I’m realising there are a lot of people I have failed. We have to rethink how we approach these social issues.”

Although decriminalisation is often out of reach, there are actions police officers can take to minimise the harm of certain polices. Often this requires individual officers to push the boundaries and look for space within existing legislation. As the director of the Nigerian Drug Law Enforcement Agency (NDLEA) Mrs Roli Bode-George pointed out, although policy change takes a long time to achieve, law enforcement officers can certainly start taking a more supportive and humane approach, focusing on protecting the vulnerable, rather than cracking down on so-called ‘social evil’.

However, change also requires the police to take a stronger advocacy role. In many cases, as Marc Krupanski from the Open Society Foundations pointed out, it is actually more powerful if the calls for public-health based approaches come from law enforcement than from civil society. In many countries, law enforcement officials hold a lot of power and influence, and they possess a credibility that comes from front line experience.

As Ms Natasha Los from the Amsterdam Police put it: “Prison never helped anyone”.

PITCH is a five-year strategic partnership between the Alliance, Aidsfonds and the Dutch Ministry of Foreign Affairs.